The Osmaston Park Wedding Venue is on the site of Osmaston Manor which, like many other large houses, became too much of a financial burden and was demolished in 1965 by my grandfather.

However, we have recently restored the old manor site and although the house itself is missing, the surrounding grassed terraces, ponds, stone steps and balustrades are now intact and provide a spectacular and Unusual Wedding Venue and Private Event Venue.

The estate at Osmaston is still owned and managed by my family. My wife and I were married in St Martin's Church followed by an epic party in a marquee on the old manor site. It was this wedding that inspired us to share the beauty of Osmaston with other couples and after teaming up with Top Marques UK, Osmaston Park Wedding Venue was born. Having tried and tested it ourselves, with great success, I can now recommend it to anyone without reservation! 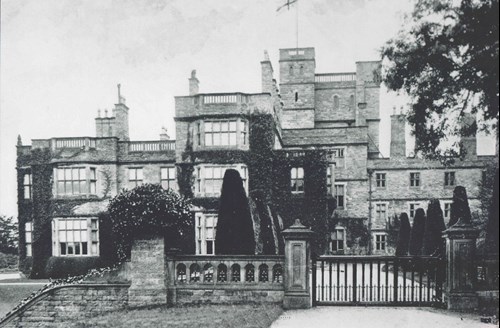 Osmaston Manor was built in the early Victorian Tudor style of limestone and echoed Tissington Hall in much of the design. The house was set within 3500 acres of parkland with trees and lakes; Sir Joseph Paxton (Head Gardener at Chatsworth) advised on the layout of the park. Once completed it had 70 rooms, a bake-house, washhouse and a brew-house and a central tunnel carried smoke from the house to a communal chimney in the garden.

The Wright family were Nottingham bankers and had made a considerable fortune from iron and coal production during the Industrial Revolution. They owned the Butterley Ironworks near Ripley in Derbyshire (builders of St Pancras Station). Francis Wright (1806- 1873) inherited Osmaston from his mother's family and married his cousin Selina, daughter of Sir Henry FitzHerbert of Tissington. In 1845 Francis Wright started to build Osmaston Manor, which was completed in 1849. Realizing that he needed somewhere to house estate workers, he had Osmaston village built developing the village even more (although there has been a settlement in Osmaston for about 1000 years).

Osmaston is an estate village and most of the buildings seen today were built around 1850 when the village was redeveloped to serve Osmaston Manor built by Francis Wright. The village still retains it's picture postcard appearance with delightful half-timbered cottages and thatched roofs The village green overlooks a duck pond and the 160-year old church and old world pub give the village an picturesque charm.

Francis Wright died in 1873 and the Osmaston estate was sold in 1888 to Sir Andrew Walker. The manor house became a financial burden to the family and like many other houses at that time, was demolished in 1965 by Sir Ian Walker who's family continue to manage the estate. 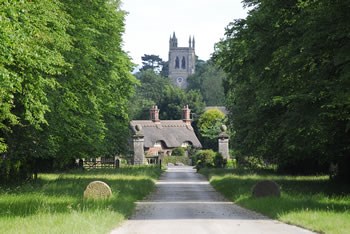 St Martin's Parish Church was built in 1845 to replace an earlier building and was the first church in Derbyshire to be built in the medieval Gothic style.

The church today remains closely tied to the village and the school, but also welcomes those from outside the parish to enjoy, use and get married in it.